The Linked In Crowd 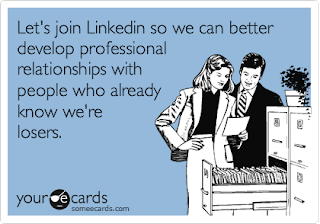 Occasionally I drag myself away from social networking sites and enter the dark, paneled walls of Linked In, the not-so-social networking site that paved the way for its predecessors. Linked In is like the older, nerdier cousin who shows up at the family reunion in Farah slacks and a bow tie, and talks about his 401k.

Lots of people, actually. Even I, unemployed and unimpressed with the business world as a whole, am convinced that I need to do some business networking. I’m not sure why, but I just do.

On Linked In, I have contacts that are a mishmash of friends, former co-workers, relatives, and fellow freelance Web writers. And President Barack Obama.

Last week I was checking in on my Linked In party, which is always well behaved and dressed conservatively, and where there’s just enough wine to allow a good time. Unlike my Facebook party, which is a co-mingling of several different in-crowds, there’s a lot of drinking, confessing, and you can count on a few hook-ups. And unlike my Google+ party, which is like a support group for a problem that hardly anyone has yet, but you’re sure it will catch on any day now. (Great refreshments, but no music and everyone is shy.)

Scrolling through my contacts’ updates, I saw that Barack has an updated profile and specifically that he added something under “Expertise.” I expected to see “Sat through record number of meetings with nameless bureaucrats”  or “Got John Boehner to cry again” or “Killed another terrorist. Huzzah!” But instead, it was a little three-paragraph pep talk to supporters that started out, “We’ve accomplished a lot over the last three years - but our work is far from done.”

Barack is the only famous person with whom I’m connected on Linked In. But if you wanted to, you could link in with tons of famous people. Did you know this? Now you do.

Just like non-famous people, the famous people vary greatly in how into Linked In they are. John McCain still lists his occupation as Candidate for the President of the United States. I had heard he was putting all of his eggs in the My Space basket.

Sarah Palin’s profile starts out with this: “My fellow Americans, come join our cause. Join our cause and help our country to elect a great man the next president of the United States. And I thank you, and I - - God bless you, I say, and God bless America. Thank you.”  You’re quite welcome.

She’s got four recommendations. One from Kurt J. M, whose recommendation ends with “Never forget 9-11!” Patrick M, an at-large delegate from Ohio to the GOP convention in ’08, says, “She speaks well. I heard her speak at the convention and in subsequent interviews.” Traci Gregory’s recommendation says, “Embrace her!”

I could go on and on about Sarah Palin’s Linked In page, but then I would run out of room to talk about other people. Like Hillary Clinton’s Linked In page, which hasn’t been updated since she became Secretary of State. Busy policing the world, are we?

Who else can we look up?

Kevin Bacon describes his job like this: “I am an American film and theatre actor who has starred in Footloose, Stir of Echoes, Wild Things, JFK, and Apollo 13, among others . . . I have always been forthcoming about my lack of professional self-confidence, but I have never let it stop me from delivering powerful performances.”

Owen Wilson only has 10 connections.

Lindsay Lohan, actress at n/a says, “I say too much sometimes, but I’m honest, that’s the important thing. It’s hard in L.A. not to go out, it gets lonely. Being an actress is lonely and I never want to be alone.”

Robert Downey Jr., recommends Rick C, who is a South African city councillor, airline pilot, bounty hunter, private investigator and corporate CEO. “Rick, I don’t know what else to say but thank you, thank you. You have been a great friend.”

Charlie Sheen still lists his job as “Winner at Life.” And then he posts his most insane, sad quotes. Charlie recommends 27 people, including Jamie B., a public sector sales director at Softcat Ltd. “Jamie is winning at life. Nuff said!”

Tom Hanks’ profile is as serious as a heart attack, including a neat list of everything he’s been in, including a 1980 episode of The Love Boat.

Bill Gates tells us his interests are “tennis, reading and bridge.”

Jeff Weiner, CEO of Linked In, has recommendations out the yahoo. He updates frequently, likes others’ updates, and seems to be the only person in America who has figured out how to post a video on Linked In.

Rush Limbaugh has one connection. (Satan? Or God? Discuss.)

I know what you’re thinking: These are fake Linked In profiles and were not set up by the people they claim to be. Sure, some are bogus, like the one for “Mrs. Kim Kardashian” which toggles back and forth between the first-person and third-person. Suspicious and slimy-creepy in a stalker fan kind of way.

The fact that the Linked In powers-that-be allow impostors to open Linked In accounts in the names of the rich and famous is an issue. Just recently blogger Ash Nalawalla (presumably his real name) complained that he brought some bogus profiles to the attention of Linked In and nothing was done about it.  His examples ranged from finding someone who claimed to work for his company but who doesn’t, to the hilarious 3Some Sex, CEO at “I wanna share your bedroom,” which is listed as a utility.

Ash suggested his readers do an Advanced Search for words like Marketing, Nigeria, Dickhead and “any swear words you know” and you’ll be surprised at what Linked In allows.

I took him up on his offer, specifically the dickhead one, and found a surprising number of people who have the name or job description dickhead. Thirty-five to be exact. Chief Dickhead at Dickhead,  Dickhead at MySefl (sic), Ura Dickhead, and Doctor at Dickhead.com, just to name a few.

In early 2009 there was a nasty virus in which some fake celebrity Linked In accounts were actually malware. Hint: If you’re on Salma Hayek’s Linked In page and she offers to link you to naked pictures of herself, you might want to rethink that click.

I’ll stick with Barack as my one and only famous Linked In connection. He’s unlikely to recommend me or view my resume, but I have as good a chance as any of his other 500+ connections to having him show up at my Linked In party. I hear he likes a dry chardonnay.