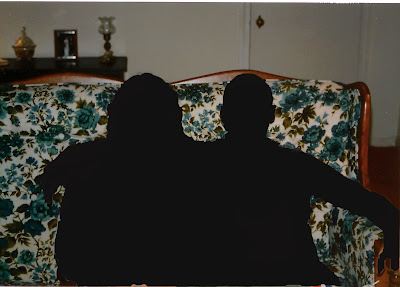 Everyone remembers her very first piece of adult furniture. You know, the first thing that wasn’t a plastic parson’s table, a crate painted peach, a futon, an unframed poster, or anything too big to have fit into your dorm room or your childhood bedroom.

For me, it was our big blue flowered couch. It was Ethan-Allen-sturdy strong, in the early-1970s-era of Early American. There was as much wood trim as there was upholstery and it had a proper little skirt at the bottom. It was given to us shortly after we got married from my mother-in-law, who had had it in her living room for most of my husband’s life.


It still looked brand-new, though, because she had protected it with a throw except for parties and company. I’m pretty sure she was not happy with my decision to let the big blue flowers expose themselves for everyday use and not cover it or protect it in any way, although she didn’t say anything. The big blue flowered couch not being covered may have been one of the first examples of my mother-in-law letting me do whatever I wanted without any words from her. (An historic event in the history of fabulous mother-in-law moments.) 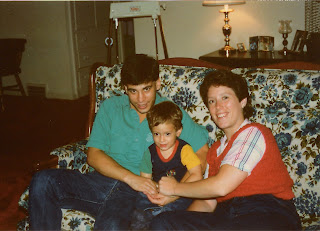 So we brought the big blue flowered couch into our first apartment, a one-room efficiency in Columbiana Manor Apartments, along with some other matching pieces - the gold Early American rocking chair, a big wooden coffee table, an end-table, and a big round pedestal kitchen table with four captain’s chairs. We got two pages of the Ethan Allen 1970 catalog in one fell swoop. My mother-in-law outfitted her new condo with new, lighter, sleeker furniture with an Asian influence, making a clean break from anything big, blue or flowered. 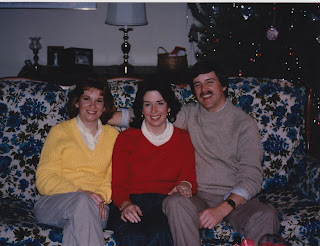 But we were happy to have the big blue flowered couch. It was a monster, but we loved it. 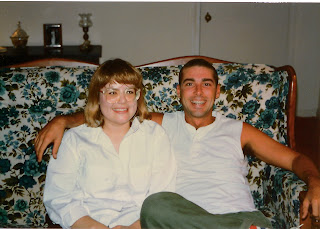 We moved it from that first apartment to our next apartment, which was literally next door. I don’t even think we asked our friends to help us move; we just each grabbed an end of the couch, shuffled it out the door, around the corner, to the next door in the hallway and right into our new home. Repeated said process with the other nine pieces of furniture we owned, and the move was complete. 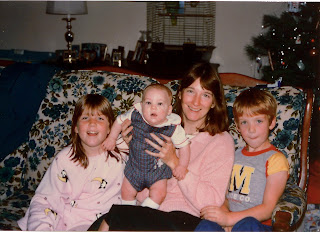 It came with us to our next apartment in New Middletown, which is a whole ‘nother blog topic. All I’ll say about the New Middletown apartment is the woman across the hall left for work in a tight mini-dress at midnight and got back home at about 7 a.m. And there was a bulldozer parked outside our living room window. The big blue flowered couch was possibly the nicest item in the four-building complex. 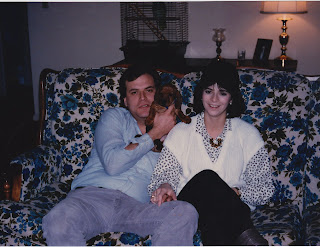 It was in our big living room when we moved to the duplex on the north side of Youngstown, and in our first house in the big blue farmhouse in Poland Township. By the time we moved to Cleveland, it was practically a part of our family. In Virginia, it went into our lower level family room in our three-story townhouse. And that’s when we decided we could use a sofa-bed for guests, since everyone we knew (and some people we didn’t really know all that well) seemed to want to come to visit us in suburban DC. 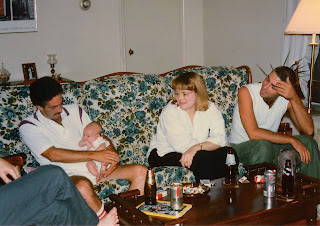 We thought it might be time to replace the big blue flowered couch. 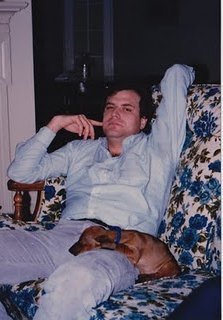 My husband told me that if you put a sofa on the curb at garbage day, the garbage men will pick it up and take it to a farm. I believed him. I still believed that all of our dogs’ puppies went to that farm, when I was a little girl. I pictured our castoff furniture full of romping and napping little mutts. 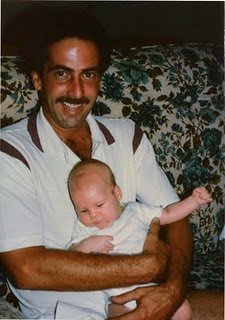 So that’s why I agreed to put the big blue flowered couch on the curb. It was great, but it hadn’t aged well. The previously white background was now the color of apple juice and for good reason. We now had two children and 90 percent of all the liquids that went in them and came out of them were a yellowish-beige. Our first dog, Schnitzel, had chewed away some of the wood. One of the buttons was missing.

Still, I felt bad for it, seeing it sitting at the curb all sad, with all the smelly garbage. I sat at the window all morning, watching, until the BFI truck arrived. The guy jumped off the back of the truck, eyed it up and down, lifted up the cushions, set them back down (I thought he was fluffing them), and then motioned to his buddy. Together they lifted it and heaved it into the back of what looked an awful lot like a regular garbage truck. Uh-oh. This can’t be right. I started to rise up out of my chair.

Five minutes later, I picked myself up off the floor and called my husband at work.

“Find a good home, my ass!” I sobbed into the phone. “They crushed her! Right in front of me! All her bones broke and now she’s dead!”

My husband  tried to salvage what had been a good scam up until now. He didn’t want screw up a future of furniture mass murder.

“Oh, there must’ve been a mix-up,” he said. “I’m sure I told the guy on the phone we wanted the couch taken to the (inaudible words mumbled . . . cough!) They must’ve sent the wrong truck.” 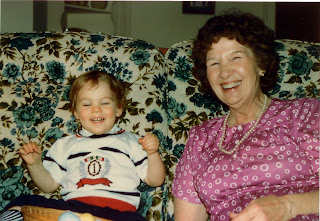 I mourned for that couch. I couldn’t wait to be rid of it, but I felt awful that it had been crushed to matchsticks. It was a perfectly good couch, other than the fact that it was so big, so blue and so flowered. There wasn’t a thing wrong with it. I mean, I didn’t want it, but that doesn’t mean someone else couldn’t have had it in their house. 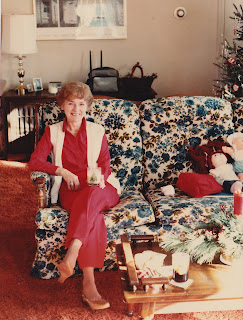 The big blue flowered couch had been with us so long, it was one of the most photographed members of our family. Looking back through old photos, it seems that almost everyone we knew had their time on the couch.

And it never matched anyone’s outfit. Ever.

Stay tuned for Part II: When I Let My Husband Pick Out the Replacement for the Big Blue Flowered Couch Without Me
Subtitle: I Never Seem to Learn